The best Events in Sardinia in August

9 best August Events not to be missed

We’re in the heart of summer and Sardinia is preparing to receive a large number of tourists and visitors that will populate the small villages and the beautiful beaches. Although Sardinia is most famous for its Caribbean beaches, there are also beautiful mountain regions to explore and can be easily reached by driving around by car.

Both in the coastal and mountain towns, from north to south, there are numerous local events and festivals that will make you know and appreciate the typicality of the island.

Among the most important events in Sardinia in August we have the Discent of the candlesticks of Sassari (Discesa dei Candelieri) and the Feast of the Redeemer of Nuoro, one of the oldest and important event of the island.

Great festivals dedicated to Sardinian food and drinks there’s the feast of the Zichi bread of Bonorva and Vermentino wine – festival of Monti.

So many events in Sardinia in August that we decided to select those more interesting and exciting!

And if you are still undecided, here’s our tips on where to go for August in Sardinia…don’t be unprepared, this month is going to be sold-out!

9 Events in Sardinia in August that you’ll be thrilled to live this summer! 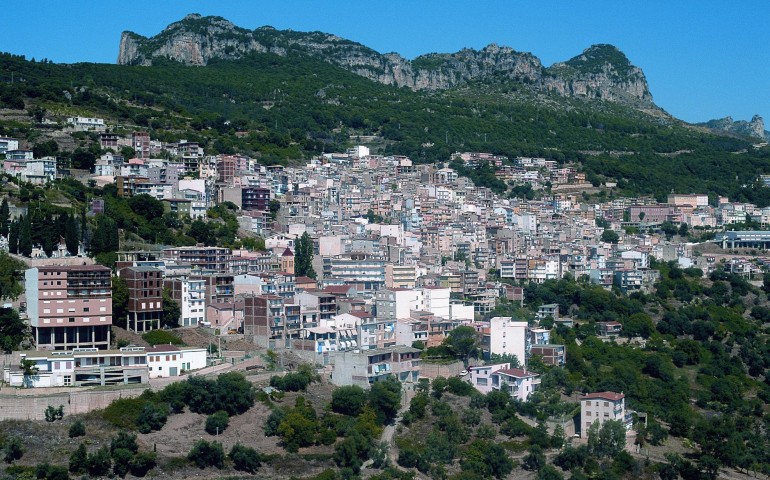 Between August 7th and 10th, the eno-gastronomic event is held around the cellars of Jerzu. The Cannonau wine is the protagonist of this event. You can not fully experience Sardinia except through a glass of its most representative red wine, the Cannonau.

Jerzu – a tiny village in the hinterland just a short distance from the Gulf of Orosei – opens its doors and its cellars through a tour of music, food and wine. Tastings, visit to the cellars, Sardinian music and folk groups dancing from various Sardinian countries. There will be dancing, eating and of course…drinking!

One of the most spectacular locations in Sardinia hosts the most exciting and eagerly awaited festival of the summer. The best artists of the moment in four days of non-stop music and pure adrenaline. Don’t miss the 2022 edition, to name but a few: 50 Cent (the only one date in Italy!), Ofenbach, Afrojack, Elettra Lamborghini, JAx, Ghali, Achille Lauro…and many others. 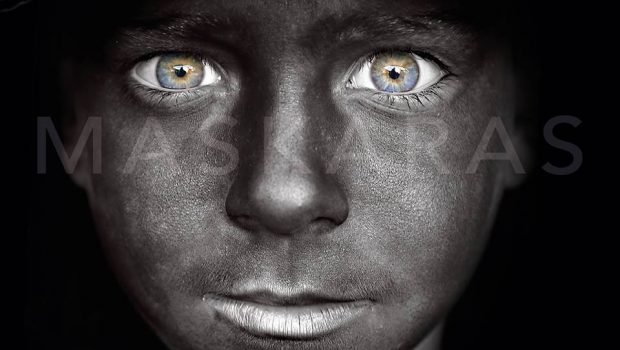 Every summer Muravera creates a unique show through the summer carnival “Maskaras”. The theme of the carnival is represented by groups of masks arriving from the most internal areas of Sardinia. They perform in a long parade that traces the entire main street of the village. Ritual dances that evoke propitiatory rites linked to the life of the camps.

What are the meanings of the masks?

Mamuthones and Issohadores of Mamoiada among the most ancient and typical masks of Sardinia. They evoke a sacred and melancholy dance, aimed at driving away evil spirits in a mysterious and gloomy ritual. Accompanied by the intensity of cowbells

Boes and Merdules of Ottana devalue tied through a rope that symbolizes the union between man and beast. Among the various figures stand out “Sa Filonzana” the most feared that represents the Greek Parca of death.

Mamutzones and Urzu of Samugheo, with their bells, play the rhythm of passion and death to ingratiate themselves with nature so that the crops are abundant.

S’Urthu di Fonni instead mimics in his representations the process suffered by the character “su Ceomo”, puppet that symbolizes the carnival. Sentenced to ‘hanging and burned at the stake, responsible for all the wrongdoings made by members of the community

S’Urtzu of Ula Tirso, victim of the carnival, is a tragic mask half man and half animal. Representation of the god Dionysus, has the power to ward off curses and drought, propitiating fertility. 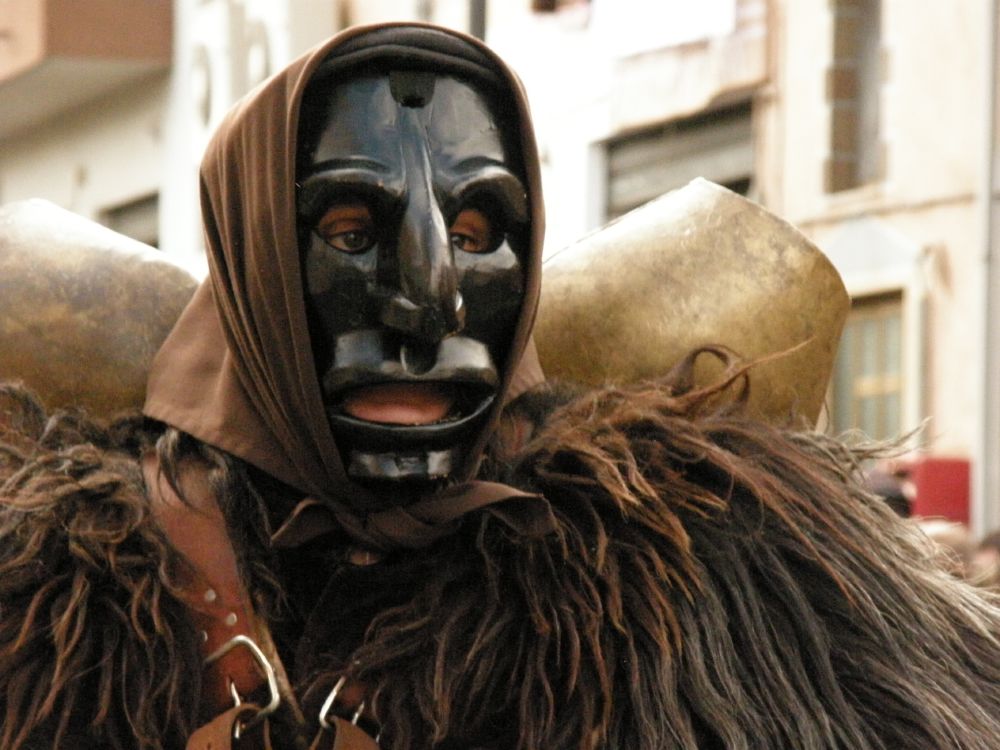 The festival of the Candelieri is the festha manna (the big feast) of Sassari that dates back to the thirteenth century and has been chosen by UNESCO as a world heritage event. The procession of Candelieri (Candlesticks) – called Faradda by the locals – is a ritual involving an entire island. A procession in which the entire population participate: the bearers of the huge candles (the candlesticks), the Gremi and the gremianti.

Right in the middle of the summer this is the most awaited event in Sardinia in August. On the 14th of August, early in the morning, the day of Faradda begins with the so-called “dressing”. The descent of the Candelieri takes place on the evening of August 14th starting from Piazza Castello. The candlesticks walk the streets of the city center to the rhythm of music dancing with the huge wooden columns.

The protagonists of the festival are the Gremi, the ancient associations of arts and crafts of Spanish origin. In Sassari there are nine: the stonemasons (ie the stone workers), the travelers (people who travel for trade), the peasants, the carpenters, the gardeners, the shoemakers, the masons, the tailors and the massai. 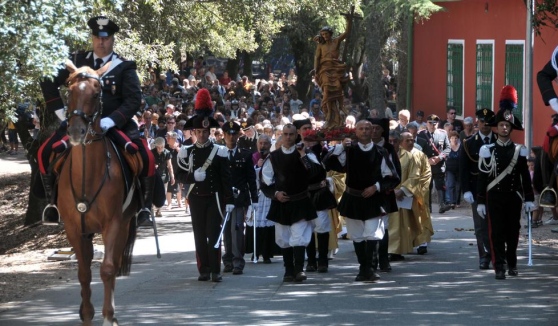 The festival of the Redentore of Nuoro is the MOST important EVENT in Sardinia. In 2022 the edition number 122 is celebrated, for over a century it is one of the most profound and heartfelt events of the entire island.

The festival is celebrated with the traditional parades of Sardinian costumes, the parade of the 100 knights, folk groups of Sardinian music, eno-gastronomy, parades, street-food, crafts and the 500 Sardinian carnival masks.

The feast of  Madonna del Mare di Bosa is a colorful and engaging celebration that takes place on the first Sunday of August. A procession of boats that goes up the Temo river and reaches the Cathedral of the Immaculate in the historical center of the city, where the statue of the Holy Mary is carried in procession. A day of celebration and colors that makes the village of Bosa once again one of the most evocative and favorite destinations for local events in Sardinia in August.

A festival dedicated to the Vermentino wine. Besides of wine tastings and typical products there will also be folk performances of the Sardinian tradition.

Each year attracts more and more wine enthusiasts and is becoming one of the most important events in Sardinia.

Zichi is the typical Bonorva soup bread. The preparation is rather long but simple. The evening before the bakery is prepared Sa madrighe (the dough for bread) crumbling in lukewarm water Su femmentalzu to ferment the dough of the zichi.

During the festival, you can taste the various recipes based on zichi bread and attend the various shows of music and traditional dances. The characteristic of this bread is that it can be consumed both hard and soft. Being long-life it was ideal for long journeys of shepherds or farmers who, being away from home, could not have fresh bread daily.

The dough is flattened in order to obtain bread disks of 35-40 cm in diameter. The bread forms are placed under the covers to encourage leavening that lasts 6 to 12 hours. Once ready, it is fired in a wood-burning oven where the leavening of bread becomes a sort of oval ball

Once cooled and hardened, it is cooked in boiling sheep broth or in lard and parsley. It is kept on the fire for 10-15 minutes and is seasoned with pecorino cheese. Tasty!

One of the great events in Sardinia in august is the Red Valley Festival bringing on the big names in Italian and international music in the Olbia Arena. An event divided into four evenings in which great guests will take the stage to dance, jump, and scream at the top of their lungs the hits of the summer. This year’s guests will be Blanco, Martin Garrix, Irama, Max Pezzali, Salmo… to name but a few. Grand finale on Ferragosto day with Pinguini Tattici Nucleari, Fabri fibra, Marracash, Il Tre, Rhove.

THE MOST POPULAR EVENTS IN SARDINIA

The most important events in Sardinia in May

The Sardinian Cavalcade of Sassari

The feast of Sant’Efisio of Cagliari