The hike to the Nuragic Village of Tiscali 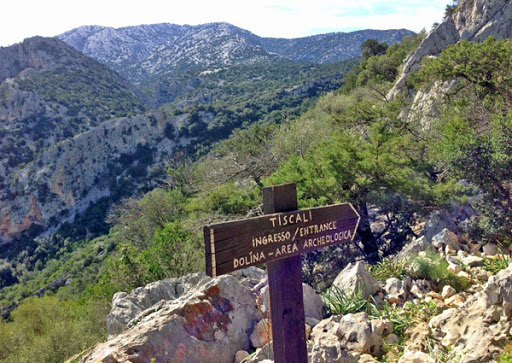 The charm of Sardinia is timeless. This is demonstrated by the many archaeological sites scattered on the island that shows a history of which we still know very little.

Is perhaps for that aura of mystery that we curiously admire the Nuraghi, the Menhirs, the Domus de Janas because their magical and ancient history represents the authentic Sardinian identity.

The oldest sculptures in Sardinia are in the open air, between the coast and the mountains. The centuries-old junipers shaped by the wind, the granite rocks smoothed by the sea, the rugged and wild peaks of the Gennargentu mountains.

If you want to go beyond the classic-beach-holiday, you have to rent a car and go in search of the soul of the Sardinian land.

Drive through the roads of Barbagia and head to the center of the island. Here you will discover a nature that leaves you speechless.

In the heart of the Supramonte mountains, among the imposing limestone rocks there are millenary places created by slow erosion that over the years have formed gorges, chasms and caves.

This area between the Supramonte and the park of the Gulf of Orosei is particularly rich in paths and itineraries suitable for medium and high difficulty trekking.

Among the most interesting places within this area: the source of Su Gologone and the extraordinary canyon of Gorropu.

Moving then towards the borders of Dorgali and Oliena we find a site that is a few millennia old and dates back to the 1st/2nd century BC. In the heart of the Supramonte on the summit of Mount Tiscali (about 500 meters) there are the remains of an ancient Nuragic village.

The remains of the Nuragic Village of Tiscali

The Nuragic village of Tiscali is an archaeological site located in the center of Sardinia on the border between the towns of Dorgali and Oliena.

It is a site of which very little is known so far, as the first and only excavations were made only in 1999. The archaeological area is enclosed in the cavity of a sinkhole and preserves the remains of some prehistoric huts and buildings.

During the excavations some artifacts and materials were found which helped to identify the origins of the site. Among the remains of the Nuragic era found there are pans, plates, vases and jugs. While among the finds from the Roman era, fragments of walls and tips of wine amphorae were found.

For the few information we have, it is assumed that it was a small civil settlement inhabited by shepherds as shown by the cattle pens and housing structures. The point near the valley represented a particularly sheltered place suitable for agro-pastoral development. There were thought to be over 60 huts.

Unfortunately, not much remains of the ancient village today, this is also due to the neglect and abandonment that characterized it for many years.

The peculiarity of this ancient settlement is obviously its location. It’s literally wedged inside the limestone walls and it is not visible until you reach the interior of the cavity which is accessed through an opening in the rock wall.

From here you can dominate the entire Lanaittu valley from which you can enjoy a wonderful view made of a rugged and wild territory. The area is surrounded by millenary junipers, by rock sculptures worked over the centuries by wind and water.

It starts from the bottom of the Lanaittu valley. It is necessary to take a rather high dirt road with some narrow sections. Once you reach a lay-by area, continue on foot.

There are two main paths that lead to the top of Tiscali. The path 411 which for about 1km runs along the shore of the Lanaittu river crossing it several times up to the fork with the path 481 which leads up to Tiscali or Cuile sos Mojos. It is also possible to climb it through the path 410 considered the most panoramic and by some also the most difficult.

Although the trails are well marked, it is necessary to have maps or better to go accompanied by a guide to make the most of the site and learn more about the site.

Once at the top, through a sort of channel dug into the rock you can go inside .

You will be surrounded by ancient rocks where to breathe the air of the most ancestral Sardinia.

Continuing the excursion inside this karst settlement it is possible to find some caves and less traveled paths. You must always be very careful when choosing to go off-the-beaten-path because it is very easy to lose orientation and have difficulty finding the way back.

Being an almost circular path, you can go up and down using the two different paths clockwise or anticlockwise, without having to do the same path on the way back.

The hike to the nuragic village of Tiscali requires some preparation. Although not particularly complicated, the trek includes various steep climbs and descents as well as rough rocks and pitfalls due to the rather inaccessible terrain. Be aware, it is not an easy walk, but a real excursion of medium difficulty.

The demanding route and the difficulty of the walk is itself part of the charm of this place. It is therefore good to be organized because the excursion takes about a full day between the various stops and the exploration of the area. It is better to bring enough water and food.

Note: the entrance to the archaeological site is subject to charges. Once you get to the top to enter the cavity you pay a ticket of €5 per person.

How to get to Tiscali

The Lainattu valley can be reached by car. From here continue for a few kilometers along a dirt road following the signs that lead to the parking lot for Tiscali which is located at the end of the valley.

Attention, because it is not a real parking but a simple dirt clearing. After leaving the car, continue on foot following the directions indicated by the white/red CAI signs indicating the numbers of the paths.

Length of the hiking trail: 1h 30min – about 2h to go up and the same to go down. To complete the entire route therefore about 4h.

Important things to know before the hike to Tiscali

Where to sleep near the nuragic village of Tiscali

Surrounded by trees and mountains, this farmhouses offer moments of peace and relax.

You can check on the map the prices of b&b, hotels and farmhouses in the Dorgali and Oliena area