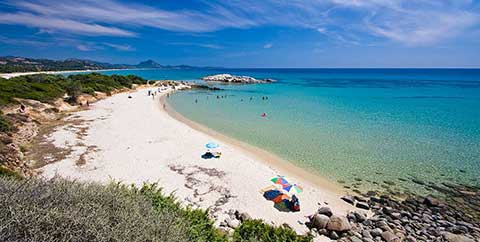 When is the best time to travel to Sardinia?

When should I visit Sardinia?

These are questions we hear frequently, along with What’s the weather like in Sardinia? You can know more about the weather conditions on our page Sardinia Weather

Best time to go to Sardinia

The favorable climate makes it an ideal destination for all periods of the year.
The best periods are the months of May, June, September and October less crowded and very pleasant temperatures
Spring in Sardinia is very impressive, with long bright and sunny days. Nature is at  its maximum splendor and the beaches although the water is colder is still accessible and enjoyable for a day by the sea

The Climate in Sardinia

Sardinia has a typical Mediterranean climate with mild, rainy winters and hot and dry summers. The temperature rarely drops below freezing, except in some inland and mountain areas. In the province of Nuoro in the winter there is snow. Sardinia is typically very windy, enough to be named the island of wind. The Mistral is the most frequent wind blowing throughout the year, but more often in winter and spring.

Thanks to the presence of the wind high temperatures are made more bearable along the coastal areas, while inland areas are more affected by the heat peaks because of the attenuation of the winds.

In winter the temperautre of the coastal areas varies between 18 ° and 8 ° of minimum, while in mountainous areas reach up to zero degrees

The temperature of waters

The sea water is quite cool with some variations according to the coasts.
In June and October the temperature is about 22 ° in July and August around 26 °